Homeless Man Reveals Amazing Secret In Front Of A 7-11!

I read this beautiful story on Facebook this morning and just had to share it with you. A kind woman shared how she'd befriended a homeless man in her neighborhood.

Well, you won't believe how God used her in this man's life! Read on for this POWERFUL testimony for how a simple act of kindness can completely change a life!

Words can bring life or death into someone's life. Never underestimate the power of a positive spoken word. Speak life into someone. Believe in someone. Help change someone.

This was just sent to me by an awesome and beautiful friend I've known for years. It shows what can happen if you just take the time to talk to someone different.

"I'm literally crying as I type this. About a week ago I posted a story about a very unconventional relationship I began with a homeless man In our neighborhood.

I have worked with him over the course of several weeks. Just talking to him and showing him love. He sits out in front of our local 7-11 all night long. Anyone who knows me, knows that Slurpee are my vice and I find myself at that 7-11 often. 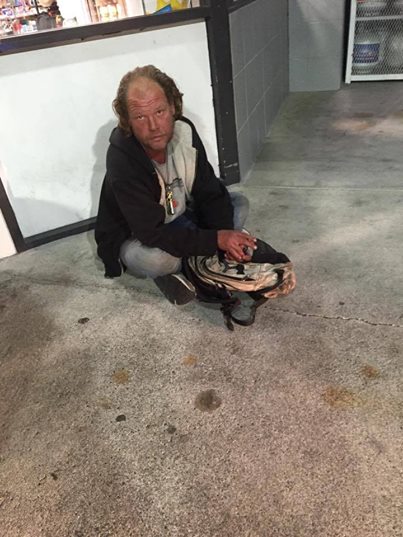 I've never tried to push God down his throat or make it about him coming to church. I've just bought him food, given him a few dollars here and there, and sat on the curb and talked with him to learn about his life.

I learned that he's been to college and actually has a good education and at one point was headed for success. Due to tragic circumstances, he began drinking to numb the pain.

It was a quick downhill slide to where he now finds himself sleeping on the streets. When I pulled into the parking lot tonight, his face light [sic] up. When I got out of the car he said, "Come here sweet pea, have I got news for you."

He began to pull business cards out of his pocket of a therapist he's met with, also of a social worker that's helping him get into rehab and then find housing. He contacted his family and tried to make things right with them and has dreams of going to law school.

He was like a little kid as he was excitedly telling me that he's getting his ducks in a row.

He said the fact that I treated him like an equal or even like a human made him feel a little tiny bit of hope that he hasn't felt in years.

Me just taking the time to listen to him and telling him that I believed in him, made him start to believe in himself again.

I'm so excited to see what he does with his life. I'm sure it won't be easy but I believe he can do it.

With God all things are possible.

Reach out! Take an extra moment or two to show love to someone who desperately needs it.

My life is only enhanced by taking the time to care about another human being. We are all Gods creation and made in His image. Let's not judge a book by its cover. See through the eyes of God. Through eyes of love."

Do BIG things for God, one little moment at a time.

Find out why these business owner are pan-handling!