Disaster Struck After He Got Down On One Knee. Then Strangers Came To His Rescue!

A sweet North Carolinian couple just got engaged and they already have an unbelievable story to tell their grandchildren.

Kayla Harrity, who is 24-years-old, and her soon to be fiance, 25-year-old Matthew Picca, were on a vacation with Kayla's family in Southport, NC, when Matthew decided to drop down on one knee to pop the question.

Everyone was so excited, but that’s when it’s when it all went wrong.

Kayla tells us,"I turned around and he was getting down on one knee. As he opened the ring box, the ring fell out of the box and fell through the cracks on the deck and into the water. I didn't even get to see it before it dropped."

The entire family and everyone watching were lost for words.

"I covered my face and began to cry because I knew my boyfriend was devastated," Kayla said. "Matthew did not even get to say anything to me before the ring fell into the ocean."

Just seconds after he dropped the ring, Matthew, Kayla's brother-in-law, and her sister jumped into the water, fully dressed, to find it. 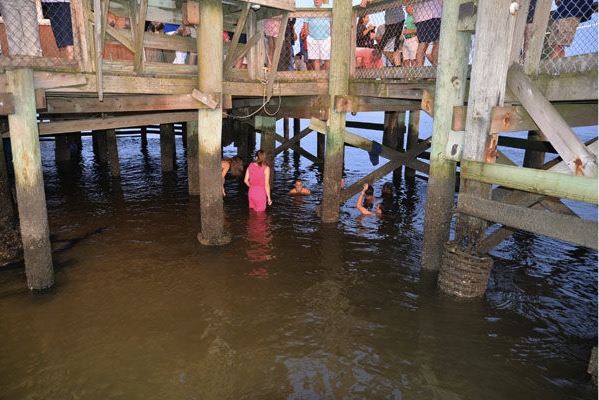 There were even men at the nearby restaurant who saw the whole thing. "They must have felt bad for us and did not want to see our engagement end like this. They jumped in the water and helped look for the ring.”

Poor Matthew even lost his cellphone during the whole ordeal. His sister thought he had a special waterproof case that would allow him to use his phone’s flashlight underwater. But he didn’t.

"I began running to the neighboring restaurants asking if anyone had goggles," Kayla said. "I knew if we had some we could find the ring."

Folks in the restaurants were giving the group flashlights, and someone ran home to get goggles.

"After ten flashlights, and five pairs of goggles and over 1.5 hours of searching in the water...the ring was found!" Kayla said. It was a man named Kyle Blusher who found the ring and he let out a loud yell when he did.

"Everyone at the [restaurant] was cheering. All of a sudden, everyone was chanting 'Propose again! Do it again!'," Kayla remembered. "It was the best feeling in the world. My fiancé, soaking wet, smelling like salty, fishing water, proceeded to get down on one knee and put the beautiful ring on my finger!" 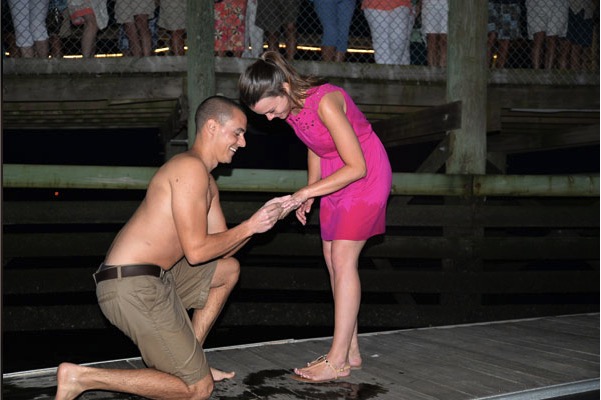 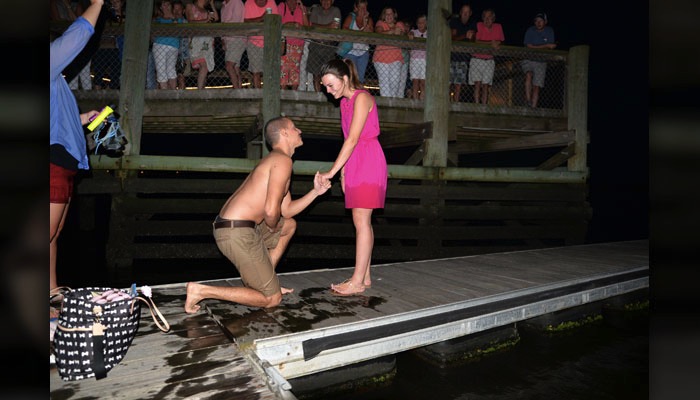 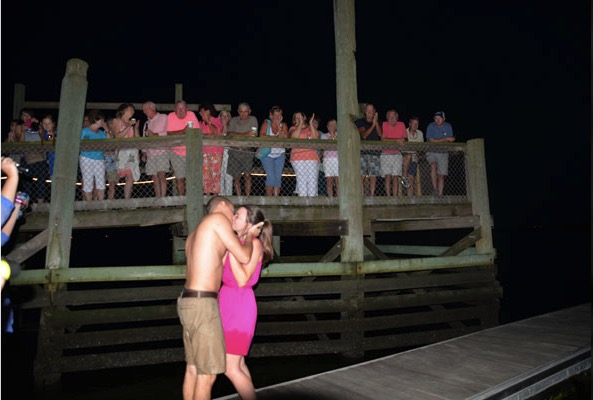 "The energy of everyone at the bar was incredible. It was a total shock that he even found the ring,” The couple treated the men who helped at the restaurant. "They were amazing and we are so grateful to have their help that night." 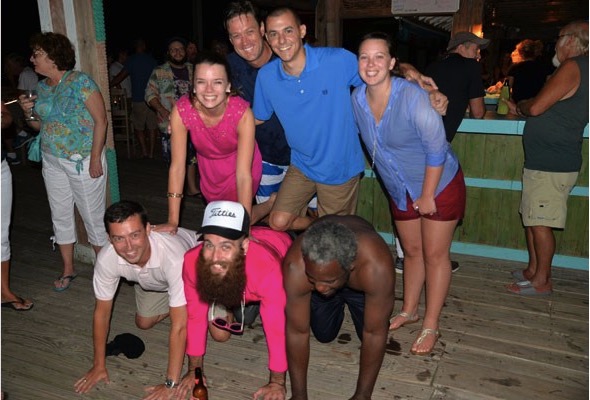 After celebrating the engagement and the recovery at the restaurant, the newly engaged couple went on a romantic carriage ride.

"When we got back, people were still coming up asking to see the ring," Kayla remembered. "They said everyone in Southport was talking about it. It was definitely a night to remember!"

The couple will return to Southport for their wedding next year. And when that special day comes, they will be holding onto their rings tightly! Almost just as tight as they will hold each other in the years to come. 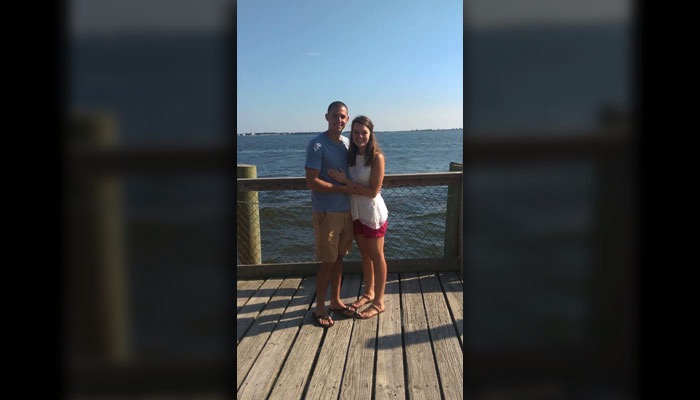 She thought he forgot the choreography, the TRUTH is the sweetest proposal ever! 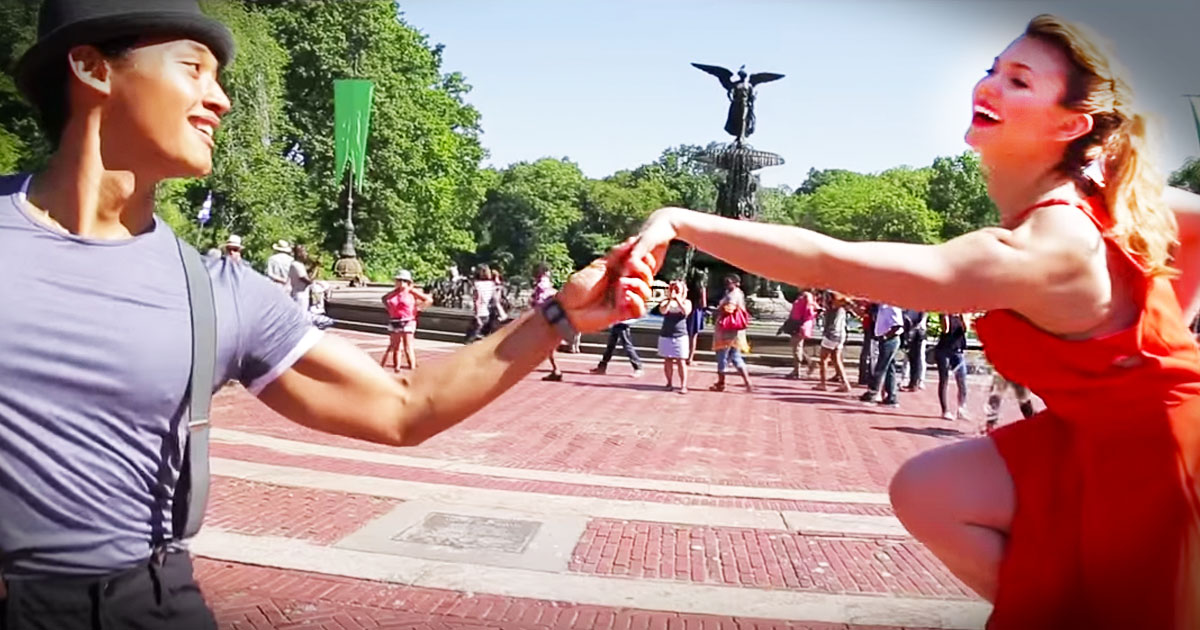 This flash mob proposal seemed run of the mill until...